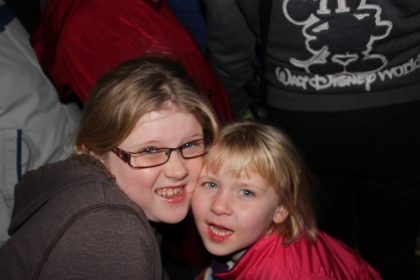 I am so glad we found the Society. It is home to the people I want my children to emulate. This is our spiritual home and I am so proud to be UU.

I was raised Lutheran and my husband was raised Catholic. As adults, we were without a faith home for many years–we knew what we didn’t want, in terms of organized religion, but hadn’t really put in the time and effort to figure out what we did want.

When my daughter was about three, she started learning the Lord’s Prayer from her cousin. That was when I realized that we really needed to figure out what we believed and wanted our children to believe, or else they would learn about faith and spirituality from others.

We had been married by a UU minister and so I returned to this religion that, at the time, I knew so little about. We visited the UUSC and felt welcomed and at home from the beginning. We attended services for several months before we officially became members in January 2012.

My now 8-year-old daughter and her 5-year-old brother attend religious education classes, and my daughter finds it shocking that other children are not allowed to explore spirituality for themselves, but are told what to believe. They learn about many different religious traditions but always focus on treating others and the world with kindness and empathy.

As I get more involved in the church, first serving on the Religious Education committee and then joining the Board of Trustees, I appreciate the hard work that it takes to maintain a welcoming space for so many diverse viewpoints. I find support and friendship in the UUSC members, and I’m happy to have a faith home for myself and my family.