I know it may surprise you, but as board president sometimes I get emails from people who are unhappy about something the board, or the staff, or a member of the congregation, or the universe did, or didn’t, do. Many times these are thoughtful in their disagreement. Sometimes they sting, sometimes my first reaction is of annoyance as to why I am being pulled into something that’s well outside the scope of my role. Sometimes they are downright mean. But generally, after my initial reaction I try to give grace to the person whose email interrupted my endless list of business-y emails.

Recently I was discussing an issue that had been raised to a group that had worked hard on a project. The criticism was uninformed and judgmental. I had worked on crafting a response that attempted to be kind and informative and using my amateur analysis of where the person was coming from to defend their actions, when a member of the group said “I don’t know why the heck you don’t say – Why would you think your congregation would intentionally do something so irresponsible? Why would you not look at your congregation with the assumption of good intentions?”

Of course, that member of the group was right. I was trying to be nice and wasn’t expecting or holding the fellow congregant up to appropriate behavior. We are a congregation. We should be assuming good intentions of our congregation. We have all joined of our own volition. With shared goals.  We have seven (maybe soon eight) principles that guide us. And if we look at those principles – you probably have a bookmark that lists them – they speak to dignity, compassion, acceptance, conscience, respect – they even presume some difference of opinion – and ultimately a common purpose. We should be able to trust the intentions of our congregation, even if we disagree with some decisions or actions.

Over the next few months we as a congregation have a lot on our plate. We will be hearing from the Search committee regarding our Ministerial Path Forward, we will be saying goodbye to Rev Joe, we will hopefully see more opportunities for meeting in person, and more I’m not thinking of as I write this late at night. Nothing will be perfectly suited to each congregant. But we should trust it will come out of good intentions. Let’s remember to assume it ourselves and expect it from others. 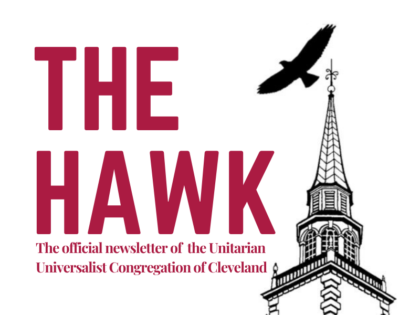