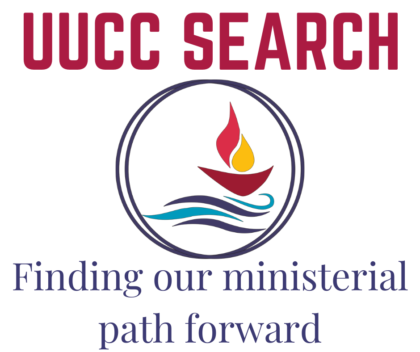 What is “Search”?
Search is the often used term to describe the ministerial discernment process and the process for finding new settled ministers for a Congregation. The general process is a period of Congregational evaluation (surveys, etc.), cottage meetings, creating informational documents about the Congregation (“a packet”), interviews, candidating, calling. This process is handled by the Search Committee.

When will the search take place?
The process starts immediately and will continue until the Search Committee makes its final recommendations to the Congregation and those recommendations are acted on. The process will take 10-18 months.

Who will be on the Search Committee?
The Leadership Development Committee (LDC) will nominate the slate, following the UUA process which involves canvassing all members of the Congregation for nominees and making sure that the overall committee has the skills needed for search and represents the breadth of the Congregation. The LDC will present a slate for vote at the annual meeting on May 31.

Who is the LDC? Why are they nominating the Search Committee?
LDC is the Leadership Development Committee. It is an independent committee defined in UUCC’s Code of Regulations to handle leadership development and nominations. Specifically, in our code of regulations, the LDC is charged with nominating Search Committees. The LDC is comprised of 4 elected members and 2 Board representatives. The current LDC is comprised of Kim Littell (chair), Mike Arrington (vice-chair), Eileen McCully, and Carol Gibson. Erika Brown and Carol Gay are the Board represntatives.

What is Rev Joe’s status?
At reunification, a little over a year ago, Rev Joe Cherry was hired as the UUCC Contract Minister through June 30, 2020, a term of about 17 months. In April, 2019, Rev Joe asked the Board to give him an indication, by the end of October 2019, about its intent to extend his contract, an understandable request since October marks the beginning of the hiring season for UU ministers seeking new positions. After an evaluation and careful consideration of the needs of the Congregation, the Board notified Rev Joe in late October that it had voted to indicate that it intends to extend his contract in June 2020 through June 2021. We are grateful to Rev Joe for his continuing service.

Is UUCC ending its relationship with Rev Joe?
No. The Board is honoring the agreement that it made with Rev Joe upon reunification. The Board has indicated that it intends to extend his contract through June, 2021 at which time we expect the Congregation will have made a decision regarding the ministerial path forward.

Is Rev Joe a candidate or going to be our settled minister?
This is a decision that has not been made yet and will not be made until after the Search Committee is formed and organized. There is a defined process in the UUA Settlement Handbook regarding “inside candidates,” and Rev Joe could be a candidate. There will be no decision on this until after June 2020.

Why did the Board not ask the Congregation about extending Rev Joe’s contract through June 2021?
The Board of Trustees, according to the Code of Regulations, is responsible for hiring contract ministers and the decision did not require a vote of the Congregation.

What is the UUA process?
The UUA Settlement office has prepared a Settlement Handbook that describes the entire process, both from the Congregation and the ministerial point of view. In addition to the 100 page handbook there are short videos describing each section. If this is of interest to you we urge you to look at these.Details can be found on the UUA website: https://www.uua.org/careers/ministers/transitions/settlement-handbook

How will you know what the Congregation wants? Will I get a say?
Everyone will be invited to participate in the process in various ways. Being an active participant in the Search process is a privilege and responsibility for Members of the Congregation.

Are we ready to do a search?
Because decisions must be made about ministry at UUCC, and the Congregation is the only group who can make the decisions, we will have to collectively rise to the occasion.

Ministerial Definitions
Called/Settled Minister: A minister who has been voted on (“called”) by a congregation to be their minister. Calling is the last step of most search processes.

Contract Minister: A minister who has been hired by the Board (not called by the congregation). Currently Rev Joe is a contract minister at UUCC. He was a Settled minister at the UU Society prior to reunification.

Specialized contract ministers:
Interim Minister: A minister who has been hired by the Board to provide ministerial services after a settled minister leaves and before a new one is called. The interim minister works with the Congregation to prepare for a new ministerial leader. An interim minister is typically at a Congregation for one or two years.
Developmental Minister: A minister who has specialized skills and training to work with Congregations that have extra challenges and want to work through them. Generally 5-7 years.