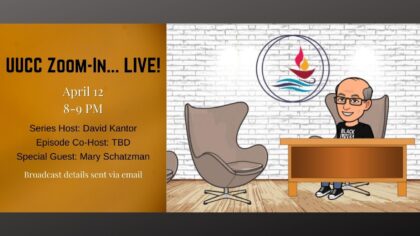 Two past Board Presidents – one from The Society, the other from First U – will be the special guests on UUCC Zoom-In…LIVE in April. Mary Schatzman, a former Board President from The Society, will appear on April 12, while Don Stimpert, a former President of First U, will be the special guest on April 26. The show airs 8-9 pm eastern time on both dates. Don’s episode is available on our YouTube Channel.

“Don was a member of the Finance team that did the financial due diligence and financial projections for the reunification.”