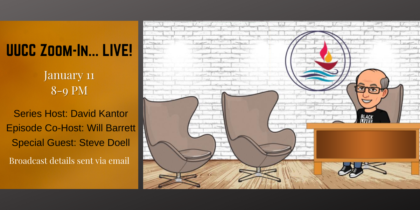 Steve Doell, current Board member, former Board Vice President, and somebody who knows a little something about election operations, will be the guest on UUCC Zoom-In…LIVE! on its inaugural show of 2021 – Monday, January 11, 8-9 pm.

“We’ll hopefully know the results of the Georgia senate seat run-off elections by then, we’ll have just finished the final confirmation that Joe Biden will be President in a couple of weeks, and there’s still all of this stuff floating around about the validity of our voting processes,” noted David Kantor, host of UUCC Zoom-In…LIVE! “We thought that this would be a perfect time to have Steve as a guest to share some of the nitty-gritty about elections with us.”

“Steve is a veteran of many an election in his role with the Cuyahoga County Board of Elections,” David continued. “I’m VERY interested to learn about mailmen filling out “extra” ballots, buckets of mail-in ballots being left by the riverside, and all of those deceased individuals who rise up on election day to vote. Steve had wondered if people wouldn’t be tired of hearing about elections; I told him that I thought our congregants would love to hear about the logistics from somebody who’s on the inside.”

Will Barrett, a sophomore at Kent State University, will co-host the show. Jack Ulman will also return for the “Jack Ulman Comedy Moment” after missing the last show because, in David’s words, “he was boating off the Florida coast.”

REMINDER: All UUCC congregants will receive the link to the show via e-mail – sender named “Zoom In Live” – on the Sunday evening prior to the show.

Stories for the Weekly Update must be submitted online by Sunday at 5PM for that week’s edition.