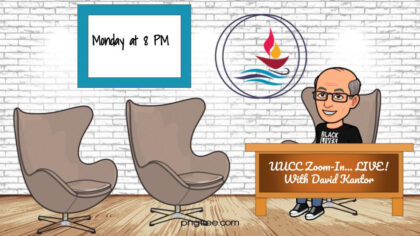 Dawn Arrington Thoughtful and Funny as Guest on February 8 Episode

One of UUCC’s true icons, Nancy King Smith, will be the special guest on the February 22 episode of UUCC Zoom-In…LIVE! (8-9 pm eastern time).
“Nancy has been a leader for both UUCC and one of its predecessor, First Unitarian. She was a member of the initial UUCC Board, and was, among other things, Board President of First U,” said David Kantor, host of the show. “As she typically is, we know that Nancy with a thoughtful guest on a wide range of topics.”

One of the topics that will undoubtedly come up will be the internal dynamics of Nancy becoming a leader at First U. “Nancy was one of the leaders as the predecessor congregation was evolving from males being in the leadership roles to the current day circumstances, where females are in positions of authority throughout the congregation,” David noted. “How smooth was that transition? Well, Nancy can tell us.”

“Nancy has also had a long and storied life as a justice advocate. It’s impossible to list all of the areas and issues that she has championed, but her work on the environment and racial justice certainly should be highlighted,” David noted.

Claudia Victoroff will sit in for Jenna Bradbourne (it’s her birthday!) as co-host for the show, and Jack Ulman will be there for the “Jack Ulman Comedy Moment”.

The February 8 episode featured UUCC member Dawn Arrington, a member of the Ministerial Search Task Force, engaged in many other UUCC and First U major initiatives in the past, and community activist without peer.

During the discussion, Dawn, a Cleveland native who still lives near to where she grew up, discussed her journey to get to Unitarian Universalism, how she met her husband (the famed Mike Arrington – they both worked at the Marriott downtown), and her thoughts about systemic racism. Dawn was very thoughtful and direct in her observations, including:

It would be helpful if White people believed people of color when they share their experiences – like when a police officer drew a gun on her and her children while they were in their car in their driveway because the car was similar to one that had been reported stolen.

In working towards a more just society, it would be helpful if White people would “just not be racist”. Don’t ask people of color for the answers, this is the work that Whites need to do on their own.

If you missed the interview with Dawn and would like to view it in its entirety, it will be loaded onto our YouTube channel sometime after February 22.

REMINDER: All UUCC congregants will receive the link to the February 22 show via e-mail – sender named “Zoom In Live” – on the Sunday evening prior to the show.